Bilfinger UK was tasked to deliver a fit-for-purpose solution which would provide safe access to the underside of the platform to remove and replace the underdeck oily drains pipework.

David Cruickshank, Project Manager, Bilfinger UK, said: “As we continue to support operations within a maturing basin, innovation has never been more important. Layher FlexBeam is a step change in the way we offer access solutions to our clients, this collaborative project has gone some way to showing what can be achieved when you have a fit for purpose solution, a forward thinking client and an engaged workforce.”

“Having watched this project progress from the early engagement sessions with Layher, all the way through to our Scaffold Foreman carrying out its first scaffold inspection, I am extremely proud of what our team have achieved. This project was delivered on time, within budget and most importantly with zero HSE concerns; an outstanding accomplishment from everyone involved.”

Ryan Clegg, Bilfinger Scaffold Technical Authority, said: “I am absolutely delighted that Bilfinger are the first to bring this fantastic access innovation to the offshore industry. As Scaffold Technical Authority, it has been great to be part of this project from planning through to successful execution. This is a huge step change for an alternative access method that we are excited to bring to all our onshore and offshore operations.”

Sean Pike, Managing Director, Layher UK, added: “We are delighted to have been involved in and to have supported Bilfinger UK in this flagship underdeck system with our FlexBeam. It is the first use of our FlexBeam offshore on the underside of an oil rig, not only in the UK, but also the rest of the world.”

“We were therefore very excited to play our part in support of the whole team at Bilfinger UK, from the procurement departments, technical and T.A. management team through to the scaffolders that had the job of turning the scheme into reality. We were also delighted to assist in product familiarisation and hands on training onshore, at our Livingston depot so as to ensure, as best as possible that the scaffolders were as prepared as they could be on a dry run, prior to the real installation out at sea.”

“From our point of view the final realisation is superb and with Bilfinger UK we now look forward very much to achieving the same success and time and money savings on several more offshore rigs – I would especially acknowledge the hard work and positivity of the scaffolding crew in particular, and all of the Bilfinger UK team involved without whom this level of project build and delivery success would have been harder to achieve.” 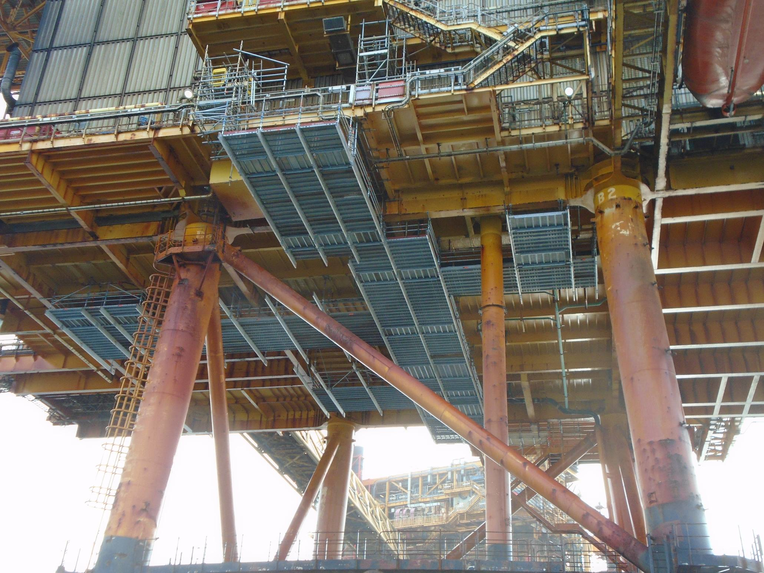